One of the most renowned names in the classifieds business, Chip Perry, has joined the board of Russia’s emerging auto classifieds platform Am.ru. Perry played a major role in the establishment of AutoTrader.com, of which he was CEO from its inception in 1997 until May 2013, when he resigned. 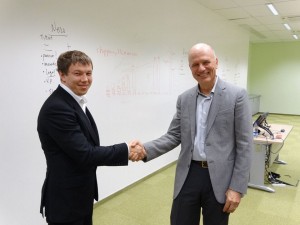 He oversaw AutoTrader’s expansion to one of the world’s largest auto classifieds firms, with the company recording revenue of $1.4 billion U.S. in 2013 and reaching a total valuation of $7 billion U.S.

Am.ru, widely considered as the fourth biggest auto classifieds player on the Russian market, expressed its delight at having the experienced Perry on its board, and said it could give them an edge on the emerging domestic market. The company’s founder and CEO Oleg Golubtsov (photo) has overseen a major advertising and human resources drive in a bid to overtake competitors on the Russian market, which include Avito.ru and Auto.ru.

For more details on Am.ru’s progress and the fierce rivalry of the Russian auto classifieds market, please read our upcoming coverage on the segment in CIR15.07.