StepStone, one of Germany’s largest job boards, will suspend Job Messenger according to an email sent to candidates on Friday.  The app enables chats between job-seekers and companies and will expire on March 31.

“Since its launch two years ago, StepStone has gained many new insights into the needs and difficulties of job-seekers,” the email said. “The communication between companies and job-seekers is and will continue to be a central component of StepStone’s application process — but in future without the functions of Job Messenger.” 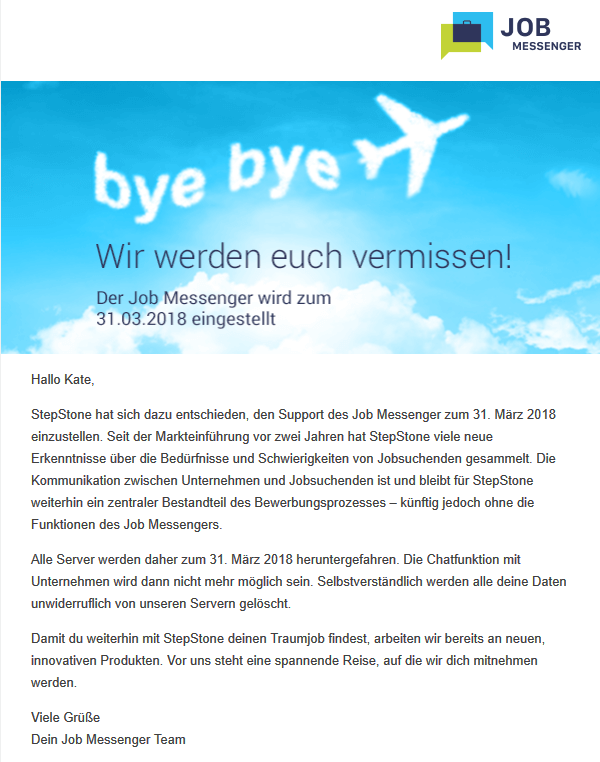 The notice said StepStone is already working on “new and innovative” products.

Inga Rottlaender, PR manager at StepStone GmbH, told the AIM Group on March 28 that the company turned off Job Messenger as a standalone product but kept the functionality. Through experience with the app, it learned how to improve communication between them even more effectively, and is “currently working on an integrated solution for direct communication and look forward to presenting it soon,” she said.

Job Messenger has actually been around less than the two years StepStone claims. It launched in beta in October 2016 and was rolled out to all users in January 2017.

Tha app was meant to boost candidate engagement by enabling potential applicants to communicate with recruiters early in the hiring process — companies could add a link to the app on their job descriptions. The service targeted job seekers in IT and other technical fields with big talent shortages.

But Job Messenger never took off. Both IOS and Android apps have been downloaded less than 5,000 times, according to SensorTower estimates. Not much for a site with 30,000 companies as clients and monthly traffic of nearly eight million.

We’ve reached out to StepStone for some details on its decision to pull the plug on Job Messenger and its replacement.