The U.S. government on Friday seized Backpage.com, a leading general-classified website that has been the subject of extensive investigations during the past few years. At least one of its founders was charged with a crime.

In a statement posted on Backpage.com, the feds said it was seized “as part of an enforcement action by the Federal Bureau of Investigation, the U.S. Postal Inspection Service, and the Internal Revenue Service Criminal Investigation Division. …”

AzCentral.com, the website of The Arizona Republic, reported a 93-count indictment sealed indictment was filed in the case, with undisclosed charges. The Phoenix newspaper said the FBI confirmed “law-enforcement activity” at the home of Backpage founder Michael Lacey, and it reported similar activity at the home of Jim Larkin, another founder of the site. 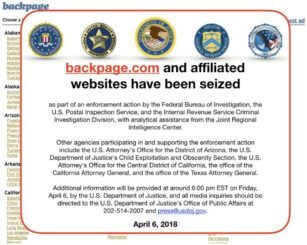 The notice posted on Backpage.com

The Justice Department press office confirmed the seizure and said it would issue a news release at around 6 p.m. Eastern time. However, shortly after 9 p.m., the Justice Department press office reported, “The court has ruled that the case remains sealed and we have nothing to report today.” There was no indication of which court was involved, why the case was sealed, or when a statement would be issued.

Larry Kazan, an attorney for Lacey, told the newspaper that Lacey had been charged but that he did not have the details because the charges remained sealed.

Carl Ferrer, CEO of Backpage.com, and Liz McDougall, corporate counsel, could not be reached for comment. We emailed both for comment, but they did not respond immediately.

The federal government and California state government have taken various actions against Backpage, which became known as a leading site for prostitution advertising. The U.S. House and Senate recently passed bills known as “FOSTA” and “SESTA,” specifically targeting Backpage.com and eliminating the overall provision in the U.S. Communications Decency Act that protected all websites from liability for content posted by users.

Ferrer, Lacey, and Larkin were arrested last October on charges including pimping. The charges were later dismissed by a California judge, who held that the site had absolute immunity from prosecution due to the Communications Decency Act.

California state Attorney General Kamala D. Harris filed 39 new counts against Backpage, Ferrer, Lacey, and Larkin in December, despite the judge’s earlier ruling, and accused the company of running an “online brothel.” Those charges are still pending. (Harris left her job as attorney general to move to the U.S. Senate.)

This is a developing story; we will provide extensive coverage in the days and weeks ahead.