StartJobs: Not a job site, but a sophisticated identity-capture site

To job-seekers, StartJobs.net looks like a chance to find work with Costco, FedEx, Walmart, UPS, Amazon, and other blue-chip companies. However, the fine print outlines something far more sinister. StartJobs is actually a sophisticated identity-capture site that leads to scam complaints, endless spam and unwanted texts and fees.

The site and its affiliate, OnlineResumeBuilders.com, have earned an “F” rating from the Better Business Bureau and generated a complaint to the Florida attorney general’s office.

“This is an online scam and something needs to be done about it,” James Clingman of Iowa told the attorney general. “I hope you will look into this company and its highly questionable ‘business practices.’”

StartJobs calls itself “the largest jobs aggregator on the web.” It promises that site visitors will “get hired faster.” But while it aggregates job listings, it’s clear the company is actually built around identity capture. Users who click on legitimate-sounding job listings are taken to sites unrelated to the listing. They are then asked to provide information far beyond what a recruitment site should require or capture.

Employment opportunities — or purported opportunities — are used to extract users’ personal data. The site collects standard information like name, phone number, address, and email address. But it also requests details like home ownership, income, debt level, current mortgage and mortgage rate. Hidden in the fine print, StartJobs discloses it may use that information “to advertise directly or indirectly to individuals using direct mail marketing or telemarketing.”

The emails and texts start within moments of submitting an “application.”

Asking a 15-year-old to apply for jobs

Taryn Powell of Albuquerque, N.M., isn’t sure why she suddenly started receiving texts and phone calls asking her 15-year-old son to apply for jobs and schooling. She just wishes she could make them stop.

Powell, a nursing case manager, texted, emailed and called to get the solicitors to leave her family alone. Once, she reached a real person rather than a recording. He seemed not only surprised to hear from her but also ill-equipped to handle her request.

“I basically got some guy on his couch fielding calls … [who] was very unprofessional,” she told the AIM Group. “He was falling over his words. He was definitely not in a call center.”

As soon as she texted “Stop” to a specific text, another would pop up from a different phone number. She knew the texts were related because each carried a telltale misspelling of her son’s name.

“This issue is potentially dangerous,” Powell said. “They’re targeting people who are trying to be productive citizens. They’re not on the up and up. Everything was screaming at me when I was on the phone with the guy, ‘This is a scam.’’’

Powell filed an alert with the BBB. “When I called the number from the text, the call was automated,” she wrote. “I asked to speak to a customer service agent and the call disconnected. When I visited the website and called the customer service number, the agent I spoke with agreed to put my number on a do-not-call list but would not tell me how they obtained my number and eventually disconnected the call.”

She said the calls had started at about the time her husband was changing jobs and used an online service to create a resume.

An “F” rating from the Better Business Bureau

Reports on the BBB scam tracker came from people who believe StartJobs and OnlineResumeBuilders are fraudulent, said Katherine R. Hutt, director of communications for the Council of Better Business Bureaus Inc. Both companies have earned an “F” rating from the BBB because the organization has tried to contact them without success, she said.

“The address we have for both is just a mailbox at a UPS Store … [and] the domain names are registered privately, which means the ownership information is not available,” Hutt said. “Those are both red flags for a potential scam.”

The company masks its ownership and contact information and uses The UPS Store, a mail drop at 199 Flagler Street in downtown Miami, as its physical “location.” It’s unclear if the companies are based in Miami.

When asked how to reach StartJobs, The UPS Store manager Alexandra Blanco told the AIM Group, “I don’t have that registered. It’s not that company.” There are privacy regulations regarding box holders, she said. When asked about OnlineResumeBuilders, which shares the mailbox address with StartJobs, Blanco said she couldn’t provide any information about the person or entity renting the box. “I can’t say,” she told the AIM Group. “But if you want to send something to them, you could use that box number, but not under that other name.”

The StartJobs.net domain was registered through GoDaddy, one of the largest domain registrars in the world — but it is a private registration, meaning the actual name and address of the domain owner are blocked from public scrutiny.

In his complaint to the attorney general’s office, Clingman wrote that he prepared a “free” online resume through the site in 2017. “I was uneasy about the online site and felt it might be some type of scam, so I paid particular attention to the small print,” he wrote.

When he was ready to print the resume, a credit card was required to cover a $1.95 or $1.99 fee, Clingman said. “The information said that if I did not call in and cancel the service I would automatically be billed (monthly, I believe) roughly $25-$30,” he wrote. “I printed off my $1.95 resume and IMMEDIATELY called in and canceled the service.”

Clingman got the name of the person to whom he spoke, and a cancellation number. Even so, soon afterward his bank account was charged $29.80. He immediately called the toll-free number and was told there was no record he had canceled the service. He was eventually promised a $20 refund, which he received, but that was less than the company had charged him.

Costco says the use of its logo is unauthorized

“This is an online scam and something needs to be done about it,” he complained. “I can only imagine the hundreds or thousands of people who don’t check on these charges when they come through and how many people have been ripped off. …

“I hope you will look into this company and its highly questionable ‘business practices.’”

A spokesperson for the attorney general said they had received just that one complaint about OnlineResumerBuilders.com and none about StartJobs.

Clingman told the AIM Group more should have been done to prevent OnlineResumeBuilders from doing the same things to others. “I filed a complaint … and they just blew it off,” he said. “Nothing happened whatsoever.”

‘We’ll call you back,’ but they don’t

The AIM Group called a phone number listed for StartJobs on Oct. 31. A man who identified himself as Immanuel Mondragon told us he worked for both StartJobs and OnlineResumeBuilders. He declined to say where the companies are based but said he worked in the Albuquerque, N.M. area. He said he would have company managers call us back. They did not.

According to SimilarWeb, StartJobs.net is ranked in the top 10,000 among U.S. websites by traffic (at 9,766). Almost 95 percent of its traffic comes from the U.S. One-third of its desktop traffic is direct, while more than one-third is sent from display ads the company places on sites including WashingtonPost.com.

Although the company says “your information is safe with us,” it notes that users are granting consent for them to sell information to more than 100 “partners” for “educational offers, career alerts, and employment opportunities.” … “I understand these calls / texts may be generated using an automated technology, including autodialed, pre-recorded calls, or SMS.” And the 15-page terms-of-service provide the broad caveat that they “may be updated by us from time to time without notice to you.”

Hutt of the BBB said employment scams sometimes merge two illegal activities: impersonating someone else to steal money, and identity theft. Scammers may use the information themselves or sell it on the Dark Web, or both, and they often operate from overseas, beyond the reach of U.S. law enforcement, she said.

Jobs at a Costco location that doesn’t exist 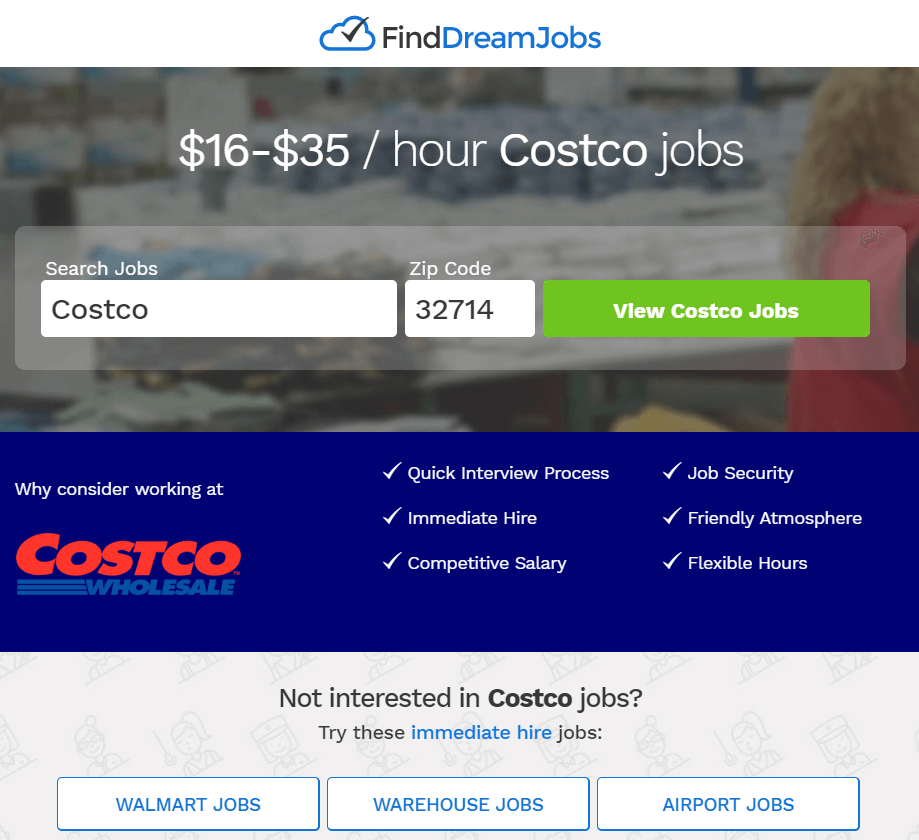 The “Costco jobs” link takes you to this questionable site

StartJobs.net lists jobs at Costco, the giant warehouse retailer. But instead of linking to the Costco corporate jobs site, clicking on the listings leads to a site called Find Dream Jobs, with a URL of NextCareerNow.com. That, in turn, links to an identity-capture site operated by Search Works Media, LLC. The company’s terms and conditions enumerate ways it can use data provided by individual “job” applicants and sets up onerous conditions for opting out of texts and other communications. However, it does not provide any information about contacting the company.

Ads for jobs at Walmart and UPS followed similar paths, although in some cases to different identity-capture sites.

One complaint to the BBB said StartJobs showed 60 job openings for a Costco call center in Elizabeth, N.J.

“I was too eager and did not research the site or the Costco facility before starting the application process,” the person wrote. “If I had, I would have learned that there is no Costco in Elizabeth and that this is a phishing site. Immediately after entering my email address and cell number, I was hammered by spam calls, spam texts and more fake emails prompting me to click on links to have a ‘grant’ directly deposited into my bank account. …

“I Googled one of the scam numbers that called me and it was attached to a website that exposed various people’s full name, date of birth, Social Security numbers, cell numbers, and credit card numbers with expiration date and codes from the back of the card.”

Costco officials told the AIM Group it does not work with StartJobs or OnlineResumeBuilders: “We don’t have a relationship with these companies and we have not authorized them to recruit for us or use our logo,” a spokesman told the AIM Group.

We asked Walmart, FedEx, UPS, and Amazon, which are also prominently featured on StartJobs, about those relationships. Spokesmen for Walmart and FedEx said they were researching the matter and would get back to us but had not done so by the time of publication. Amazon and UPS did not respond to requests for information.

Another BBB complaint said the company persisted after being repeatedly asked to stop contacting the individual. “I opted out of any further emails immediately, but in the past week I have received a junk email of job offers every day, and at least one phone call. Today I received seven phone calls in less than six hours. Every time I request to be put on a Do Not Call list, the caller hangs up on me. … I have never had to deal with such a barrage of unwanted contact before. This company should not be allowed to harass people.”

Powell, whose son was targeted, learned to react to scams because her credit card was hacked for $2,000 about 18 months ago. That changed her perspective on the dangers of identity theft.

“We got behind in our mortgage because of it,” she said. “I’m hyper-sensitive about it.” 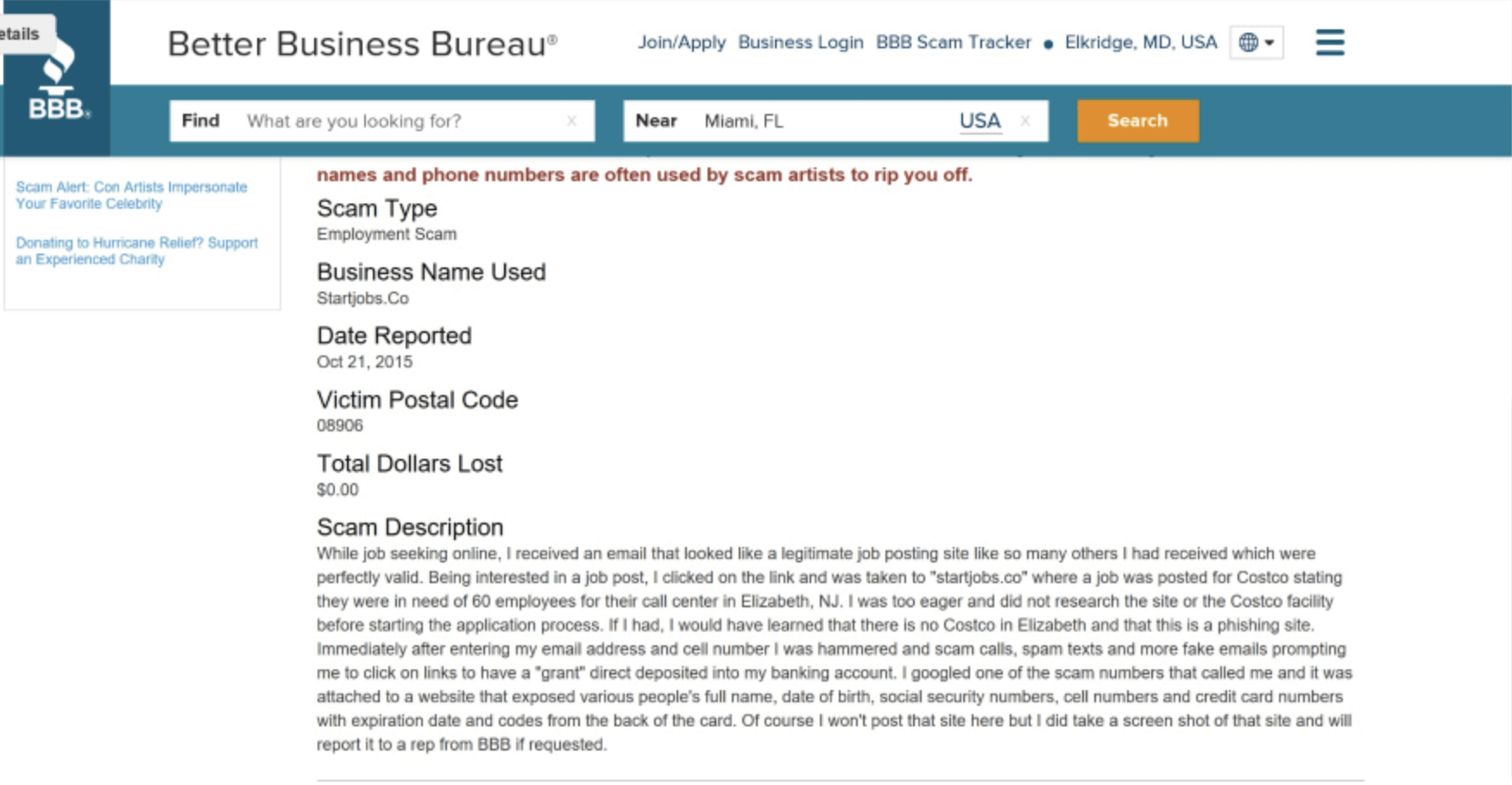 A complaint to the Better Business Bureau