TrueCar CEO Chip Perry, who joined the company in 2015 to rebuild a badly atrophied car dealer network, is retiring according to a company statement.

The company has named Mike Darrow (LinkedIn profile), an executive who joined TrueCar in 2018, as the company’s interim CEO. Perry will continue working with the company in an advisory capacity, TrueCar said.

Before taking over TrueCar, Perry was the first employee at AutoTrader.com in 1997 and was the company’s CEO until 2013. He led AutoTrader into $1 billion in annual revenue and helped make it the most popular vehicle shopping website on the Internet. 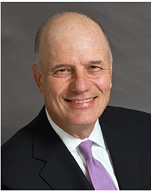 When he joined TrueCar, he replaced the company’s founder and CEO Scott Painter, who had made TrueCar a rising star with its pledge of giving consumers a “true” price on vehicles. Some of the advertising went too far in painting cars retailers as greedy and dishonest, however, and that led to mass defections from TrueCar’s client base of dealerships.

Painter was chastened and managed to slowly win back dealerships before stepping down. After Perry took over, the growth accelerated, with dealer partners growing from just more than 10,000 in 2015 to more than 16,500 today.

Perry recently said that TrueCar now serves about 40 to 45 percent of franchised dealers in the U.S. He said TrueCar expects only a modest uptick in franchise dealers this year, “but we have a good, strong, healthy network now that is stable.”

“I feel beyond proud of the work the TrueCar team has done over the past few years,” Perry said, adding that he believes he’s “righted the ship.”

The company’s earnings have not been so rosy. Although revenues have climbed year by year under Perry, the company posts consistent losses. Last year, the company reported $353.6 million in revenue with a net loss of $28.3 million.

Perry conceded the 2018 result was “disappointing,” and explained to investors that the firm’s engineering resources were tied up with a major technology upgrade, called Capsella, for its platform. Q1 results this year were also disappointing and Perry made a downward revision for TrueCar’s 2019 earnings forecast. This triggered a stock sell-off that saw share prices drop 22 percent in after-hours trading.

Perry hands over the reins to another industry veteran, although a relative newcomer to  TrueCar. Darrow is currently executive vice president of partner & OEM development and president of TrueCar subsidiary ALG, which focuses on automotive residual value projections. Before joining TrueCar, Darrow filled executive roles for more than 14 years at Edmunds.com.