InfoEmpleo.com addressed the issue of ageism on its blog, highlighting a recent marketing campaign called “Give my father a job” (“Contrata a mi padre”). The video features a real-life father and son. The former is a 59-year-old professional who had been out of work for nine years, despite having a graduate degree and many years of experience. The ad draws attention to the fact that, despite the focus on youth unemployment in Spain, life is also precarious for older workers.

Government statistics show that 1.7 million of the 3.3 million unemployed in 2018 were over the age of 45. InfoEmpleo’s Coral Jaen told the AIM Group that any form of discrimination is illegal under the Spanish constitution. European Union law also explicitly protects against age discrimination at work. Nevertheless, the reality is that many Spaniards are pushed out of the workforce at relatively young ages, regardless of education or experience.

Meanwhile, for those in the labor force, compensation and job mobility are issues. InfoEmpleo’s national salary research revealed an 18 percent gender pay gap. It also found that 70 percent of employees are dissatisfied with their compensation. In theory, this creates a pool of passive candidates, ready and willing to change jobs should a better opportunity arise.

The likelihood of finding new opportunities depends on where one lives, according to an InfoJobs.net report. Vacancies vary widely by region. The northwest province of Galicia, for example, experienced a 17 percent increase in vacancies (9,269 in May to 10,829 in June) while La Rioja had a 52 percent drop (1,873 to 899).

In total, there were around 255,000 vacancies advertised in June, a decrease from just more than 263,000 in May. Assuming unemployment figures are roughly similar to 2018 (e.g. around 3.3 million), this shows that the majority of those out of work will continue to struggle to find a job. 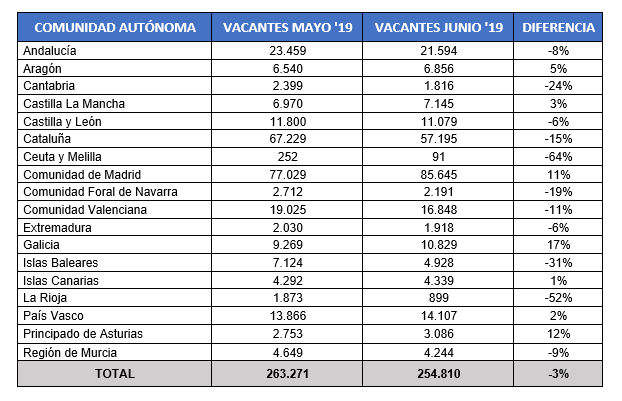