Carvana, the publicly-traded digital used-car dealer, has quietly, almost secretly, been expanding into the “marketplace” business — offering other dealers’ cars for sale on its website.

The project, which has not been widely reported before, began earlier this year but seems to have slowed down or halted completely, perhaps because of the Covid-19 pandemic.

Carvana has not disclosed the program to stock analysts or the general public, but word of the project leaked on a dealer forum and through other sources. The company was unable to be reached for comment.

Carvana is selling “partner inventory” cars, offered by dealers, under its own brand. The dealers are not named on Carvana.com.

“Partner inventory” cars are clearly labeled on the site, and a pop-up appears saying, “This vehicle must be ordered from one of our dealer partners and is not currently in Carvana’s possession. … We work with various partners to provide access to the best quality and selection of vehicles.” 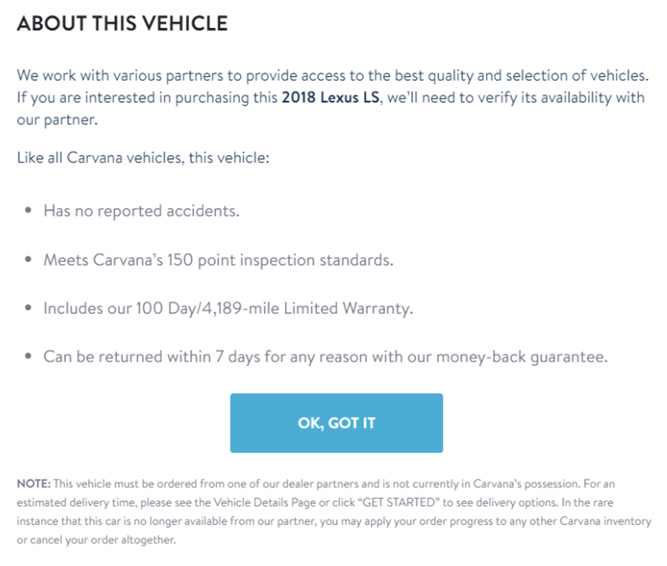 Carvana is also offering “inspected by partner” cars, which appear to be sourced from wholesale car auction companies.

Cars from dealers are also available on dealer’s websites, at the same price as on Carvana. Carvana says its quality standards apply for both partner-inventory and inspected-by-partner vehicles.

Will Carvana become a transactional marketplace?

A key question: Will Carvana open its platform and logistics to any dealer who agrees to its standards, becoming a transactional marketplace for quality used cars? This would be equivalent to the Amazon strategy of letting third party b-to-c retailers sell through Amazon Marketplace. With Carvana, dealers could potentially sell under their own brands. So far, all we’ve seen is a limited trial involving a few dealers.

If Carvana expands this project to become a more comprehensive used-car marketplace, it would compete directly with industry behemoths like Autotrader.com / KBB.com (owned by Cox Automotive Group), CarGurus and Cars.com, pitching a potentially disruptive “next-generation” e-commerce approach against their classified advertising services.

Cox Automotive CEO Sandy Schwartz recently rejected the suggestion that Carvana is a competitor. “Carvana and Vroom are two of our biggest partner customers,” Schwartz told the AIM Group a few days ago, shortly after announcing he would step down as president of Cox Automotive. “We don’t compete with them, we give them services.”

According to SimilarWeb, Carvana attracted 11.9 million visits in July, up 47% from 8 million in February. By comparison, CarGurus, the No. 1 used-car site in the U.S. by traffic, drew 61 million visits in July in the U.S.; Autotrader.com, 28.7 million / KBB.com, 19.2 million, and Cars.com, 28.4 million. (CarGurus, Autotrader / KBB, and Cars.com are traditional third-party auto marketplaces, so they’re not directly comparable to Carvana.)

We reached out to several of the dealerships involved in the Carvana project, but it appears those approached by the company were asked to sign non-disclosure agreements.. Todd Caputo, the CEO of Sun Auto Group, a small group of used-car stores in central New York state, said he was unable to comment. Another dealer we interviewed by email told us he had been approached by Carvana to participate but the company didn’t follow through, even though the initial discussion was before the Covid-19 lockdowns started.

Carvana opened 100 new markets during Q2, the company said, but temporarily halted construction of new-car “vending machines,” the company’s signature, high-visibility counterpart to used-car lots. (It announced the opening of a new one, in Louisville, Ky., this week.)

Ronald Josey of JMP Securities, an analyst who follows the NYSE-traded company, asked about the dealer partnership program on the company’s recent Q2 earnings call.

CEO Ernie Garcia responded with a comment about CarvanaAccess, which is a program in which Carvana sells cars wholesale to dealers, but declined to discuss the dealer marketplace program.

On its website, Carvana shared a few more details about the dealer partner program: 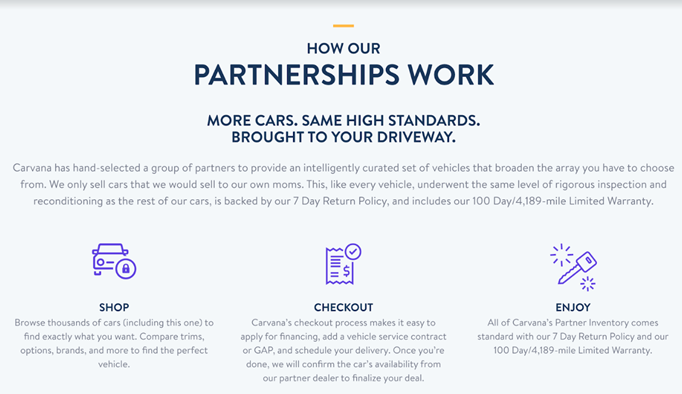 “Carvana has hand-selected a group of partners to provide an intelligently curated set of vehicles that broaden the array you have to choose from,” it says. “All of Carvana’s Partner Inventory comes standard with our seven-day return policy and our 100-day / 4,189-mile limited warranty.”

Ironically, the “about us” section on Carvana.com proclaims “NO DEALERSHIPS. And no middlemen. Cutting out the dealerships translates to lower cost for us on every vehicle we sell. What does that mean for you? We pass the savings on to you in four ways: lower prices, premium cars, a better experience, and no hidden fees.”

Several dealers on the DealerRefresh forum said they could not understand why a dealer would participate, except perhaps as an alternative to selling undesirable inventory at auction, since the dealer would not be able to sell financing, extended warranties and the like. However, in other countries, digital car retailers have been able to draw dealer participation on the basis that the dealers can sell cars more quickly, improving return on inventory, or sell outside their normal territory even while missing out on some ancillary revenues.

In April 2018, Carvana paid $22 million in cash and stock for Car360, a technology company with tools for creating 360-degree interior and exterior images of cars using a mobile phone. At the time, it was believed the company might use the Car360 tools to expand into sales of cars beyond its own inventory. The cars provided by dealers offer 360-degree online views, as is standard on Carvana.

Creating a fully transactional quality used-car marketplace in addition to its own direct sales could strengthen Carvana’s position as a stock-market darling.