Google for Jobs launches in Netherlands

Google for Jobs (G4J) has launched in the Netherlands just as the country is facing rising unemployment. The country’s unemployment rate is expected to surge 4.4% this year and 7% next year due to the pandemic. In 2019, only 3.4% of the population was unemployed.

The search engine will be available across the country this week. G4J lets users search based on location, industry, part-time and full-time jobs. They can turn on notification to get job alerts. 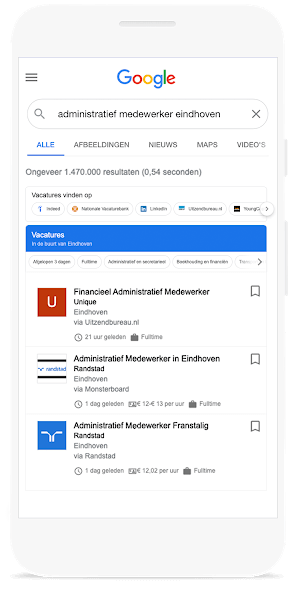 Google is working with recruitment marketplaces NationaleVacatureBank.nl, MonsterBoard.nl and Randstad.com to aggregate listings from their sites. However, any job site can integrate their job openings into the new search tool.

“The introduction of the new job search function builds on our broader goal of improving economic opportunities for Dutch job seekers and employers,” said Martijn Bertisen, country manager of Google Netherlands. “We are delighted that, together with Dutch organizations, we can offer this new position in the Netherlands so that people can look for a job even more easily.”

G4J launched in the U.S. in 2017 and has since expanded to several countries.

Google Netherlands couldn’t be reached for comments on the delay.