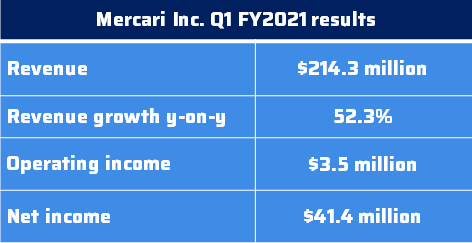 Japan-based horizontal Mercari has posted a profit for the first time since going public two and a half years ago. The profit was attributed to a coronavirus-triggered surge in online sales.

Mercari recorded Y4.3 billion of net profit in the first quarter (July-September) of FY2021, compared to loss of Y7.1 billion in the corresponding period a year earlier.

During the period, the marketplace worked on growing demand from new users created in the aftermath of a countrywide lockdown.

Listings continued to ramp up in its main market Japan, reflecting in Y43.7 billion growth in gross merchandise volume (GMV) — the only metric disclosed by the company to demonstrate its performance.

Japan has long been a profitable market for Mercari. But the company continued to incur losses in the U.S., where the company has poured thousands into branding. GMV there rose Y19 billion from the same quarter a year earlier.

The marketplace has redirected significant financial resources to improve unit economics in the U.S. and ascribed losses with relentless struggles in the American market dominated by OfferUp and Craigslist. The company didn’t disclose whether or not it had turned the corner there.

Since making impressive debut on the Tokyo Stock Exchange in June 2018, Mercari has remained one of the most closely watched tech ventures in the world.

In Q1, group sales climbed 52.3% year-on-year to Y22.2 billion. There was an operating profit of Y364 million compared to an operating loss of Y7 billion, primarily due to reduction in advertising expenses.

Read the full results here, released ahead of the schedule.