AI-generated vehicle display videos have become increasingly popular among Scandinavian horizontals. Schibsted-owned Finn.no was the first marketplace to offer AI videos. Wayke in Sweden followed soon after. Now Phyron, the company behind Wayke’s product, is looking to bring the product to an international audience.

Over the past six years, Phyron has worked to develop its AI software with the goal of accelerating video production times.

“Producing videos for all your inventory has historically been almost impossible,” said Mattias Kellquist, a co-founder of Phyron. “But with our software, it is done in minutes.”

The AI creates the video from existing photos supplied by the dealer, adding in text and the dealer’s branding. “Nothing engages a buyer more than a video of a product — it creates emotions and feeling,” said Kellquist. “But most automotive classifieds do not offer this option to dealers or advertisers.”

In an interview with the AIM Group, Wayke’s CEO Martin Fransson said Phyron has significant potential. “Phyron is a good service and is easy for dealers to use,” he said. “Video media is increasing exceptionally and is an important part of the customer journey towards a new car.”

Fransson believes that Phyron’s new AI software will revolutionize the way cars are presented on automotive verticals when it’s adopted by other classified companies.

Indeed, Phyron is planning to keep its prices low by operating on a volume-based model. Dealers pay just a few euros per month, which the company believes will encourage adoption of the software.

Phyron has also teamed up with Carweb, the leading automotive software and marketing provider in Norway. Dealers can create videos and post them on listings hosted by Finn.no, which owns Carweb. (Finn is owned by Schibsted.. It also plans to develop the software for real estate and recruitment marketplaces. 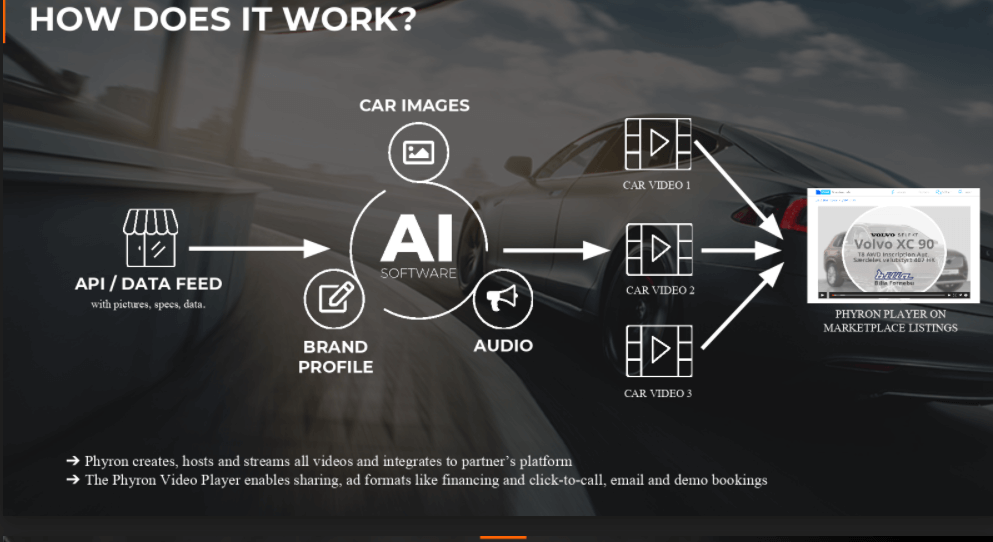 A screenshot from a recent presentation by Phyron