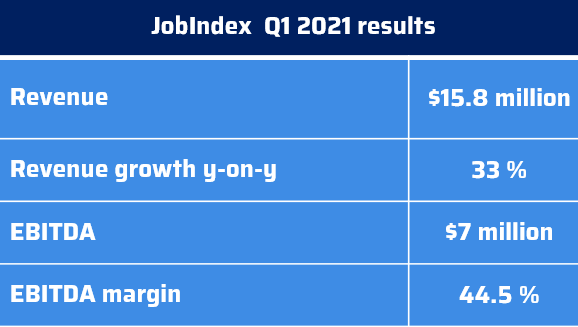 “The first week of May was the busiest week in JobIndex’s 25-year history, and the last three days before Ascension Day were among the ten busiest days we have ever experienced,” explained CEO, founder, and owner Kaare Danielsen in an email to investors.

The upward trend continued into May, and JobIndex has high expectations for the rest of 2021. JobIndex expects a net turnover of around DKK 360 million compared to a previously expected 340 million. The company anticipates operating profit to land around DKK 110 million rather than DKK 100 million.

Despite the positive news, JobIndex has expressed concern over a new competitor. In the Q1 report, JobIndex criticized Google For Jobs which has recently launched in Denmark. Google for Jobs collects jobs from several different job sites, just like JobIndex, and the company sees Google as a direct threat. JobIndex has launched a number of initiatives to address Google for Jobs, including evaluations and Quick-Apply mobile applications.

JobIndex, together with 164 other sites, has also complained to the EU, claiming that Google for Jobs is very similar to Google Shopping service. Google was fined $2.8 billion by the EU for antitrust violations related to its shopping service in 2017.