Digital retail in cars and the wider auto classifieds market is a hot space right now. This is exemplified by the number of new entrants without historic links to trading cars, led by banks in particular (Santander Group in LatAm and Europe, Société Générale in France, SberBank in Russia, and many others). The next wave could well be led by the petrol retailers, beginning with VavaCars.

VavaCars is a c-to-b-to-c (buying cars from consumers to resell online) automotive marketplace focused on Turkey and Pakistan for now. What makes it unique is that it’s owned by one of the world’s largest private oil-trading companies — Netherlands-based Vitol Group. With annual revenue of $200 billion+, the company is looking at ways to better leverage its extensive network of ‘downstream’ fuel stations strategically located in key emerging markets

Scalable links between cars and fuel

The link between Vitol and car retailing is actually much more profound than it may first seem.

“We are uniquely placed due to the competitive advantage of Vitol’s fuel retail network to source the very best cars,” Lawrence Merritt, co-founder and CEO of VavaCars, told the AIM Group from his office in London. “We believe the used-car market opportunity is enormous, particularly in moving this industry from being a very traditional offline industry into a dynamic online industry. Right now, the used-car industry feels like books in 1994 and Amazon just launched.”

Indeed, Petrol Ofisi, a wholly owned subsidiary of Vitol, operates more than 1,650 petrol stations in Turkey and is the second-biggest fuel supplier in the country. Many of VavaCars’ purchase centers are located at Petrol Ofisi sites.

VavaCars launched in Istanbul in 2019, leveraging the brand and distribution power of Petrol Ofisi, and was initally focused on purchasing used-cars from consumers (c-to-b) and selling them through its proprietary auction platform to auto dealers. VavaCars sources most of its cars directly from consumers, but also participates in auctions across wholesale platforms and purchases fleets to complement its consumer-bought cars.

The b-to-c element of the business (selling cars to consumers) was soft-launched in July.

“For the last six months, we have been testing, learning and iterating on how we sell to consumers by using some of the biggest third-party platforms in Turkey,” Merritt told us. “We have been able to validate a whole bunch of assumptions and as a result fashion our b-to-c value proposition for impact from Day 1. Ultimately, we are a data-driven company that trades used cars.”

The Turkey business is well ahead of the Pakistan market. It was launched earlier (January 2020 for Pakistan), but the two markets are also at vastly different scales in terms of online readiness and maturity.

Why Pakistan and Turkey?

Why were Pakistan and Turkey chosen specifically as the launch markets?

Both countries are largely closed off to used-car imports due to state regulations and prohibitive import taxes on vehicles. Cars thus appreciate in value and have high average selling prices. Used-cars in Pakistan and Turkey are investment assets. They are a hedge against inflation.

VavaCars sees the annual addressable market in Turkey for its business model at around $50 billion U.S., making it one of the largest markets in Europe. Around 6 million used cars are sold in the country every year.

Turkey-based marketplaces have launched a number of auto-specific features over the past year. Prosus-owned horizontal LetGo, for example, launched auto vertical OtoPlus in March.

“Being a marketplace where you can buy and sell cars quickly is no longer sufficient. You need to become a solution partner to solve problems that may occur during and after a sales transaction, and give a complete shopping experience to users,” Onur Kavak, GM of LetGo Turkey, told the AIM Group.

Meanwhile, local e-commerce giant N11 launched automotive digital retailing site Garaj11.com in June, and has teamed up with VavaCars to build up inventory.

In Pakistan, the used-car market is valued at $10 billion U.S. annually, with around 1 million transactions. There are currently three purchasing centers in Pakistan. Vitol also owns petrol stations across the country but VavaCars has not opted to tie in its services with these.

“We have seen pre-Covid levels of activity from our consumer business,” Raza Saeed, founder and CEO of PakWheels, told the AIM Group. “There has been a rapid shift toward online services and over time a lot more people will be willing to transact big-ticket items like vehicles online.”

Merritt’s mother is originally from the Pakistani city of Gujranwala, known for its enterprising entrepreneurs, so he has a good understanding of the culture. His father is from Hong Kong and he was raised in London.

“We developed a playbook in Turkey and that playbook is now being rolled out in Pakistan. The challenges we face in Pakistan are challenges we have likely faced in Turkey. So, the relatively similar characteristics of our two markets is an advantage as it makes sharing best practices real and valuable,” he told the AIM Group.

How will the service work? Consumers will be able to browse used vehicles on the VavaCars site and its various partner sites. They will be offered a 14-day money-back-guarantee, a three-month warranty and free door-to-door delivery. Every car the company buys goes through a 150-point checklist via its in-house inspectors located at the purchase centers. It has more than 30 centers in Istanbul, Ankara, Izmir, Bursa and beyond, now addressing 80% of the car park in Turkey.

Of course, the process is not fully online yet. The consumer has to deliver the car for inspection and still handle an offline notary process to complete the sale. Merritt told us that typically half of consumers that visit the purchase center accept the company’s purchasing offer.

On the b-to-c side, the refurbishment and logistics operation has also begun, with considerable further investment planned to enable a network of regional inspection and reconditioning centers.

“We are not here to launch b-to-c and offer cars consumers the way everybody does. There is no value in doing things the way they have always been done.  We are here to disrupt a current buying and selling experience that consumers generally don’t trust,” Merritt said.

VavaCars does not list or take a cut of the commission at the time of sale. This means it carries the inventory on to its balance sheet.

What about the competition? Merritt is certain that nobody is buying cars online in Turkey at any kind of scale.

“We love competition, it makes us stronger but generally we prefer to be customer-obsessed. Nobody has tried to sell cars through a fully end-to-end e-commerce journey so far,” he told the AIM Group. “The used-car industry likes to drive into the future while looking out the rear-view mirror.”

Merritt views this as his ultimate mission with VavaCars — build trustworthiness in the brand to shift the consumer mindset.

Turkey has seen an increasing interest in the c-to-b-to-c model. All the top OEMs have entered this space through trade-in options for used cars to customers, including H2.com.tr by Honda and Carbook.com.tr by Nissan. The country’s automotive marketplaces remain at a nascent stage of the transactional model, with market leaders like Arabam.com and Araba.com still primarily reliant on listing fees.

In Pakistan, there are two significant transactional marketplaces — car-purchasing site CarFirst and hybrid classified company PakWheels. But the transactional volumes remain small, it’s a market that is still there to be won. 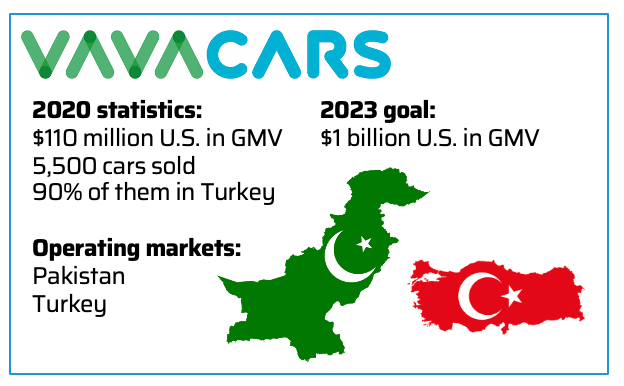 How do the numbers look?

In 2020, its first full year of operations, VavaCars achieved $110 million U.S. in GMV by selling 5,500 cars, 90% of them in Turkey. This was entirely on the c-to-b-to-b business model and during the global pandemic.

“It’s a race to get to $1 billion in GMV within the next two years,” Merritt said. “We are optimizing for volume and market share whilst continuing to improve our unit economics, which means we will continue to invest. It’s just Day 1 for us, we are well capitalized and are just getting started.”

VavaCars views Carvana as the global poster child for its business. The U.S.-based digital retailing giant launched in 2012 but did not break even until 2020.

“Some 98% of global used-car trading today is offline. This category has been frozen and it’s time for us to thaw it out. We are here to flip it from analogue to digital. Let’s call it the Amazonification of used cars,” Merritt said.