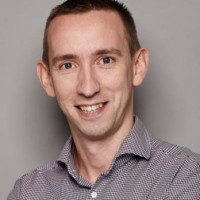 expansion of the company headcount from 200 employees in four offices to over 1,000 in 22 offices across 16 markets.

During his tenure at Forward he led the sale of Forward3D to Stagwell, was involved in the merger with PMX Agency top create ForwardPMX and helped the company acquire The Search Agency. Before that role Parr was finance director at iProspect and has also held senior positions at Betfair and Hydro Consulting.

In his new role at Adzuna, Parr will work with the existing finance and management teams to help grow and scale the business, which has played a leading role in helping millions of jobseekers to find new roles and opportunities in the aftermath of the global pandemic.

The company has worked with the U.K. government on its ‘Find a job’ online job board which played a vital role during the pandemic in advertising vacancies and recruiting candidates for specific roles. It has also supported the Office for National Statistics labour market data, used to track vacancies, employment and unemployment levels and to monitor the impact of the pandemic on the U.K. economy.

Adzuna, co-founded by Andrew Hunter, has grown steadily and now operates in 16 separate countries. It trawls through hundreds of job sites and using data and algorithms provides jobseekers with more smart options for around 12 million jobs each month. It aims to list virtually every role available online on a single site, to allow jobseekers to find the right role faster and without trawling through multiple job boards.

“His wealth of experience and strong commercial, operational and leadership background will help scale Adzuna in our efforts to help more people around the world find better, more fulfilling jobs.”