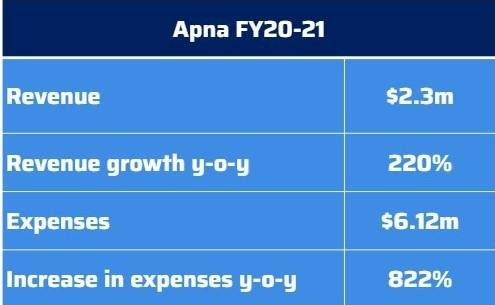 India-based recruitment startup Apna has posted 220% year-over-year growth in revenue for FY20-21. The grey- and blue-collar jobs site has posted $2.3 million (INR 17.16 crores) in revenues for the financial year ending Mar. 2021, as per the company’s RoC filings accessed by VC Circle. The revenues for the previous year stood at $721,000.

FY20-21 was a fruitful year for Apna marked by multiple funding rounds. Its first major funding was in January, when it raised $70 million through multiple investors in a Series B round. Later in September, Apna raised $100 million in a Series C round led by Tiger Global and participated by existing investors Sequoia and Insight Partners. This round took Apna’s post-money valuation to $1.1 billion, granting the company unicorn status.

Founded in 2019, Apna also holds the distinction of being one of the fastest Indian startups to join the unicorn club. Its meteoric growth in just a year is due to a number of factors, including but not limited to the increasing activity in India’s unorganized blue-collar jobs sector. Comprising of nearly 450 million workers, India’s unorganized economy is facing a combination of job losses and re-hiring due to the pandemic.

Google’s Kormo and WaahJobs—the latter of which was acquired by BetterPlace from the OLX Group—are among the ventures hoping to digitize India’s largely underserved blue-collar segment. Apna, with its mobile-first approach and partnerships with several blue-collar employers, is creating a niche for itself in the recruitment space.

Founded by Nirmit Parikh, an Apple and Intel alum, Apna is headquartered in Bengaluru and operates in 42 Indian cities. The company claims to have over 10 million users and five million jobs across 70 categories.