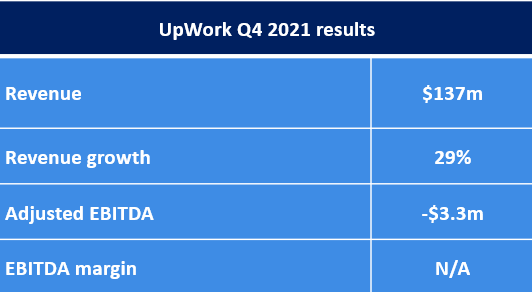 Freelancer marketplace UpWork posted a 29% year-over-year increase in total revenue in Q4, taking the total figure to $137 million. Marketplace revenue accounted for $125 million of the total, also up by 29% over the timeframe.

UpWork furthermore surpassed $15 billion in lifetime talent earnings during the quarter, added the company in its earnings release.

“This achievement highlights the magnitude of impact we have had and signals how we are leading the global movement to reimagine work,” said the California-based company.

In a letter to shareholders, UpWork said it planned to continue investing in the business to gain customer market share and improve its low brand awareness.

Product and feature launches in 2021 included Project Catalog, Talent Scout, and Virtual Talent Bench, while the company had also formed partnerships with technology and benefits providers such as Loom and Catch.

It further cited collaborations with brands including Budweiser and Kristen Kish, the launch of “The Perfect Fit” brand campaign to raise awareness, and its announcement that it planned to double the number of account executives on its sales team by the end of 2022 as notable developments last year.

2021 was also the first year of the platform executing its three-part strategy to “innovate, evangelize, and scale” its marketplace.

“Due to this progress and our confidence in our execution, we are accelerating our target of achieving $1 billion in revenue by one year, to 2024, up from our previous timeline of 2025, with a compound annual growth rate of approximately 25% over the next three years,” the company told its shareholders.

It added that it had “distinctive know-how in building and delivering relationship-centered flexible solutions for knowledge workers, products in the market that already empower workers to seamlessly transition from freelance to full-time and back, and teams that already design and deliver modern work models at scale for our Enterprise Clients.”

UpWork went on to promise “a lineup of new offerings that will continue to make the transition from freelance to full-time, and vice versa, and the integration of both working models seamless for all our customers.”

San Francisco-based UpWork describes itself as “the world’s largest work marketplace”, as measured by gross services volume. Globally, it competes with freelancer sites such as Freelancer, Fiverr and Dribbble.

The company said its users earned over $2.3 billion on the site in 2020 through more than 10,000 skills in categories including website & app development, creative & design, customer support, finance & accounting, consulting, and operations.