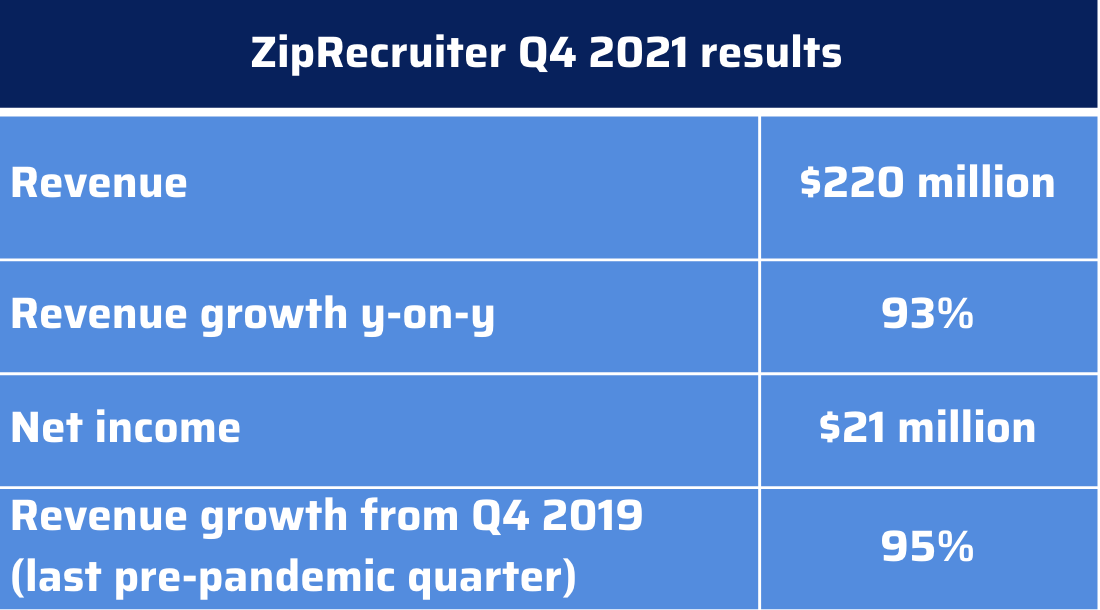 ZipRecruiter reported revenue growth during the last quarter that beat its own and Wall Street’s expectations while also raising its forecast for the coming year.

The no.3 recruitment site in the U.S. (behind Recruit Holdings’s Indeed.com and Glassdoor) posted $220 million in revenue for Q4 2021, up 93% year on year and well above its forecast of $206 million.

For the year, ZipRecruiter posted $741 million in revenue, up 73% year over year and about $14 million better than it had forecasted.

A continued labor shortage and recruiters’ desperation to fill openings drove the company’s success. With public employment data showing just .6 job hunters for every U.S. job opening, ZipRecruiter counted 147,081 paying employer clients in Q4, up 64% year on year and up 43% from Q4 2019, the last pre-pandemic quarter.

“2021 was a record-breaking year for the U.S. labor market,” the company’s quarterly letter to shareholders states. “The U.S. economy added almost 6.7 million net new jobs – the highest single-year total on record. We also saw the highest number of job openings. American employers have never been as eager to hire and ZipRecruiter was ready and able to help.”

ZipRecruiter reported in its last two earnings reports that it struggled with “lower job-seeking activity” than it saw pre-pandemic. The company didn’t give an update on job-seeking trends, but did talk up its efforts to combat the problem. During the pandemic, the company has introduced two features to let employers actively recruit workers, whether they’re looking for jobs or not.

One tool, “Invite to Apply,” lets employers send emails to workers in the company’s database based on their fit with a job. The other is an AI bot named “Phil” that alerts workers to fresh openings and recommends ways they can modify their profiles to better qualify for roles.

“Since inserting Phil, we have increased the job seeker onboarding completion rate by 29%,” the company stated in its Q4 letter to shareholders.

“Our guidance reflects our belief in a gradual return to a more traditional macroeconomic pattern by the end of the year, though still above our pre-COVID growth rate in 2019 of 18%,” the shareholder letter stated.