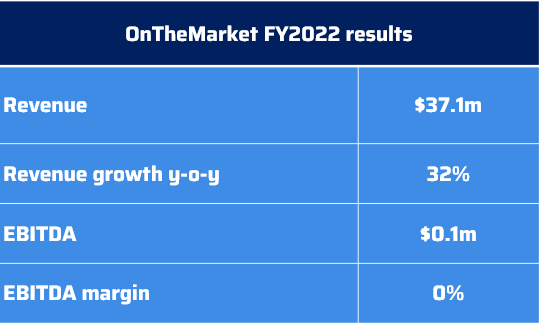 British real estate portal OnTheMarket.com has announced its full-year financial results for the year to January 2022, which, it says, shows it has made significant progress in its strategy of building a differentiated, technology-enabled property business.

The portal, which is part-owned by its agent members, has managed to convert a good proportion of customers onto full-fee paying contracts from subsidised or free deals, while increasing revenue and ARPA.

The increase in turnover was due to the growth in paying customers, growth in new homes revenue and the fact that it did not have to support customers through Covid-19 discounts of £2.6 million that reduced turnover in 2021.

The fall in cash balance was mainly due to its acquisition of proptech company Glanty, which it completed in June 2021, other strategic investments and repayment of furlough scheme funds, that together totalled £2.6 million. Last year’s financial results, in which the company made a profit for the first time used a cost-cutting strategy.

This year, its strategy as set out by new CEO Jason Tebb in April, is to invest in new products and technology. It has done this through completing its acquisition of Glanty, ongoing development of a CRM system, a set of collaborations with property data platform Sprift and tenant referencing platform Canopy and by launching a new website and prospecting and valuation tools, which contributed to a 58% increase year-on-year. Website visits increased 6% from 267 million to 283 million.

“I am delighted to be reporting a strong set of results which show that our strategy is working,” said OnTheMarket.com CEO Jason Tebb.

“With our strong performance and momentum in the business the future remains very exciting for OnTheMarket. We are continuing to deliver increased value to our customers and serious property seekers, with innovative new products and a refreshed brand.”

Looking ahead, the company said FY2023 had started well, with current trading in line with the board’s expectations and that the U.K. property market “remains very active” with demand still outstripping supply.