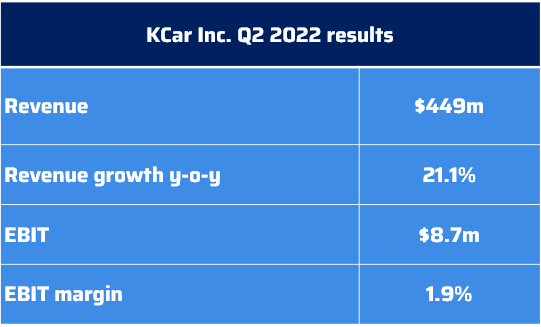 According to a company announcement, strong online sales of used cars gave KCar revenue a good push in Q2 of FY2022. Both the value and volume of online sales recorded double-digit growth.

South Korea-based KCar Inc., which operates an auto marketplace and an online car auction system, sold 14,954 units online to generate ₩252 billion in revenue. That implied growth of 19.9% year-on-year in terms of volume and 37% by value. As of June, it held around half of the retail market. Listed on the KOSPI market in October 2021, the firm that buys and sells used cars has an 81% e-commerce market share, according to the media statement.

The group is also involved in the offline and wholesale auctioning of used cars, recording aggregate quarterly revenue of ₩588 billion ($449 million U.S.), up 21%. The growth remained intact despite oil price hikes and tight interest rates.

In Q2, average selling prices also increased as there was still no respite from the low inventory of new cars due to prolonged production hiccups – a global problem thanks to chip shortages. The auto trader, however, kept its earnings before interest and taxes (EBIT) in positive territory. Year-on-year, the quarterly EBIT was down 47% to ₩11.4 billion ($8.7 million U.S.).

“KCar continues to grab market share based on e-commerce growth backed by a consumer-centric ‘online merged with offline’ (OMO) platform, as well as securing profitability by strengthening cost management,” said its president and CEO In-Guk Jung.