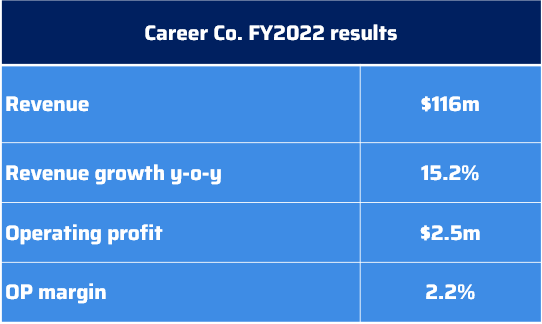 During FY2022, the company implemented new initiatives to capitalize on the growing number of active seniors in the Japanese labor force. This contributed to a 26.1% year-on-year decline in operating profit, to Y356 million ($2.5 million). However, net profit almost trebled, rising by 184% to Y195 million.

Founded in 2009, Career Co. generates most of its revenue from CareerSmile, a recruitment marketplace for nurses and caregivers. The company’s also operates Kyujin-door, a job site for middle-aged and senior workers.

As the number of active seniors in the labor force is increasing, the company expects its business to expand further and is planning to increase spending on sales, marketing and expanding its branch network.