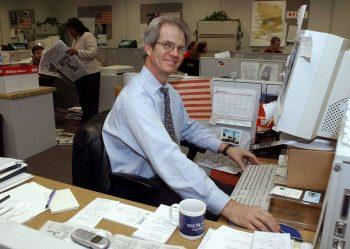 A long-time journalist, Peterson joined the AIM Group in March 2014 to edit Classified Intelligence Report, the predecessor to AIM Group Marketplaces Report. He massaged copy and headlines, worked closely with our far-flung team of writers and editors and managed posts to the AIMGroup.com blog.

“He was unflappable, mellow and funny and remarkably gentle when dealing with sometimes-difficult analysts,” said Peter M. Zollman, AIM Group executive editor and founding principal. “Patrick was a joy to work with, and he’ll be missed.”

He had Parkinson’s Disease and gave up editing for us when he found he could no longer concentrate sufficiently on the long-form articles to edit effectively.

Before joining the AIM Group, Peterson had a long career as a journalist. He wrote thousands of articles for Florida Today, The Jackson (Miss.) Daily News, the Daily Press in Newport News, Va. and other newspapers, but his most notable work was at the Sun Herald in Biloxi, Miss., where he was embedded with the U.S. Marine Corps for three tours of duty during the Iraq war.

“I always applauded his bravery and putting his own life on the line to tell the story of the local Marines and sailors,” said Stan Tiner, his editor at the time. “I worried constantly about his safety. … He was subject to the same dangers as the service members.”

In addition to his journalism career, Peterson played guitar in a band, went deep-sea fishing regularly and spent the last year of his life enjoying, and being enjoyed by, his grandchildren.

The Sun Herald published a terrific obituary about Peterson, who died Oct. 21. His family obituary was also published online. He’s survived by his wife, Lisa Cook Peterson; his daughter, son-in-law and two grandchildren; a brother and sister; and other family members.